June 12, 2019
Experienced grouse hunters will tell you that grouse hunting success is measured not by the number of birds brought to bag, but by the number of birds found and flushed by a good grouse dog.  Using this as a measure, I can say that Kaia, Vee, and I had a great hunt during the opening week of the Washington grouse season.
We left for our cabin in Republic on Wednesday the 31st of August so that we would be well rested and ready to hunt on opening morning which was Thursday, September 1st.  It’s a seven hour drive to the cabin.  The dogs slept most of the way.  We arrived to find the sun shining and the temperature in the mid eighties.  Daytime temperatures remained above 80 degrees for our whole trip, topping 95 degrees at least two days.  Anyone who works dogs in these conditions knows how important it is to keep several gallons of cold water on hand.  I also carried a quart bottle in my hunting pack and stopped frequently to let my dog drink.
We concentrated our hunting effort to the hours before noon and also the last two hours before dark.  These hours will often find the birds on or near forest roads, seeking grit for their gizzards.  A common way to hunt grouse consists of nothing more than driving the roads at dawn and dark and shooting birds off the edge of logging roads.  I won’t criticize this practice, but we enjoy parking the truck and walking through the mountain meadows and pine groves in search of Blue Grouse.  Nearly all of our birds are flushed by the dog and shot on the wing.  We enjoy doing things the old way.
I had expected the hunting to be less than spectacular this year because I know that there was an exceptionally wet spring in the area.  A cold, wet spring usually means poor survival rates for grouse chicks and this leads to poor hunting.  Last year we saw very few young birds because of poor brood survival in the spring.  For one reason or another, that was not the case this year.  We found young birds in all the usual places and we also discovered some good areas that were new to us.
Kaia is proving to be an excellent grouse hunter!  Last year was her first season and I hunted her together with my older dog, Vee.  This year Vee stayed at the cabin most days because she’s simply too old for the rigors of a ten mile hike in the mountains.  She did come with us on a couple of short hunts and it was truly remarkable to see the drive the old girl still possesses.  I’m sure she would hunt herself to death if I allowed that to happen. 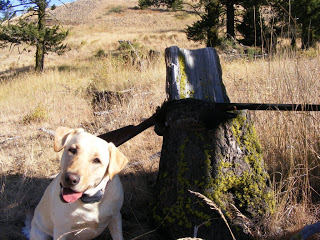 Vee was with us on the hunt when I dropped a large, adult, male grouse whose forward momentum carried him a good forty yards down the mountain, into a thick patch of brush and choke cherries.  I released both dogs to search for the downed bird, but it was Vee who finally found the prize after a brush-busting search that lasted at least 15 minutes.  Kaia was still plowing around where the bird had originally flushed when Vee delivered the large grouse to my hand.  The old girl seemed to have a bit of swagger in her step as she trotted past Kaia to make the delivery.  It’s heart warming to see that, even in dog-world, age and experience sometimes have the advantage over youth and vigor.
I don’t want you to get the impression that Kaia was a slouch though!  Over the week we hunted, she found and flushed well over a hundred birds.  Our morning hunts involved hikes that averaged about 8 miles through mountainous terrain every day.   She kept up her enthusiasm throughout the whole trip, performing well above my expectations and bringing birds to bag on each hunt.
In the evenings the dogs laid around the cabin, occasionally cocking an ear as if to listen and check the veracity of the hunting stories that were being traded.  Of course, there were extra rations for the hard working dogs.  I made sure that they had a good helping of the grouse that they had earned each day.  The legs and thighs of adult birds can be tough fare for us two-legers, but they are prized delicacies to the dogs.
Each season I save a tail feather or two from particularly memorable birds.  Perhaps it was a difficult shot or an unusually pretty bird.  Sometimes it’s because it was the only bird we found on a long, strenuous hunt.  The feathers are all stuffed into the visor on the driver’s side of my pickup.  Each one reminds me of its circumstance, a difficult hunt, a beautiful bird, a great piece of dog work.  A new feather was placed there this year to remind me of Vee’s great retrieve.  As I write this, she is curled up next to my desk.  Her breathing is even, but heavy, the contented sound of an old girl whose best hunting is all behind her.
It’s time to wrap up this letter so I can go get a special grouse out of the freezer.  You see, I have dinner date with a dear friend tonight. 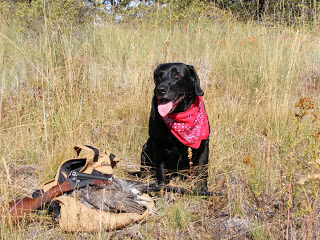