Turkey Tails: A Cure For Cancer?

Turkey tail mushrooms have been used in Chinese medicine for thousands of years, but they are still unfamiliar as a medicine to Western society. This may change in the next few years, however, as the FDA has recently approved turkey tail mushroom supplements to be used in human cancer patient trials.

University of Pennsylvania’s School of Veterinary Medicine did a study on turkey tail mushrooms using 15 dogs with an aggressive type of cancer. The cancer was so aggressive that untreated dogs typically lived only 86 days before passing away from cancer. Results of the study shocked the Penn Vet researchers. While the longest reported median survival time of dogs with the disease who were given no treatment was 86 days, there were dogs in the Penn study who lived over a year with no treatment other than the mushroom compound.

Here at Woofers, we have two groomers that have tested the turkey tail mushroom supplement on their own dog’s tumors. One of the dog’s tumors was confirmed as cancer, the other a tumor that hadn’t been tested. Both dogs experienced shrinkage of the tumors and better health. The undiagnosed dog’s tumor disappeared so completely that the vet could not find the tumor anymore in order to check if it was benign or malignant.

Here are some photos of the dog with the confirmed cancerous tumor. 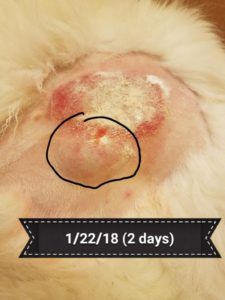 It’s a little hard to tell the tumor from a hot spot (caused by the cancer) but the circle indicates where it is on the dog. She was also put on Woofers raw meat mix and CBD, which may have contributed to the visible shrinkage. 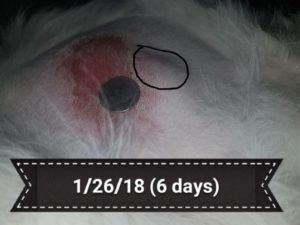 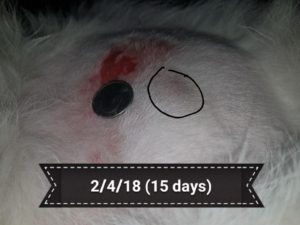 If you have a dog that has been diagnosed with cancer, or are looking for a way to keep your dog healthy so that it has a reduced risk of cancer, a turkey tail supplement may be worth adding to your dog’s bowl.